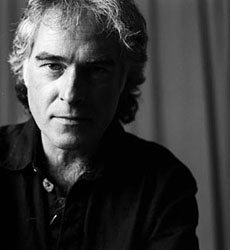 Alfred Alexander Gockel was born in Ludinghausen, Germany in 1952. From his earliest days on, he was fascinated by the magic of colors on paper. This talent and enthusiasm resulted in the release of this first art work by a German publisher at the age of 8. After he graduated from high school, he commenced his studies at the Polytechnic Academy in Munster in 1973. His main emphasis was typography, graphic design and advertising. He graduated in 1977, and in the following years he was active as a freelance artist, designer and lecturer of typography and graphic design at the Polytechnic Academy in Munster. In 1981 his works of art had developed so strongly, that he had to stop with all additional activities and become a full-time artist. This was the beginning of a long and successful career. In 1983 he and his wife Ingrid founded an art publishing company; Avant Art, today a top ranked player in the abstract segment of the market, with customers in more than 50 countries worldwide.

The bright colors and the graceful motion of his characters mark Alfred’s compositions. This is a perfect reflection of his appearance and inner-self. His hyperactivity is the basis for the large number of different projects he has fulfilled, and his striving for perfection results in the highest quality for each and every one. The competitive nature of his character has led him to an accomplished career, and after 22 years he still gets inspired by society. His creations keep improving, stimulated by a large number of fans, that also keeps increasing. The few spare hours this hasty life gives him, he plays tennis, walks in the German forests with his two dogs, or jumps on two Harley Davidsons with his wife, and drives to their favorite spot at the island Sylt.

Alfred Alexander Gockel’s art collection is subdivided into two major categories: unique art work and graphics. This unique art mostly is oil on canvas, and in some periods he also creates aquarelles. His art is composed with the most beautiful lighted colors, trimmed with powerful black figures and accents. The separate colors and the black trims all fade together, and create an individual image for every spectator, no matter what culture or social position. The graphics are etchings, screen prints and lithographs, and are artistically connected to the unique sector. The distinctive style is automatically recognized as a true Gockel. However, with graphics the production and printing process is just as considerable as the artistic performance. In his collection we can notice the craftsmanship and dedication of a man who started his career at this field of study, and still can seduce his audience with his own passion.

The unique identification of his art, and the ability to load your own emotional batteries with his power, are the most heard purchase arguments. Over the past 20 years, Alfred Alexander Gockel has tried to enrich the world with his artistic view, without influencing his public with deeper messages.

He keeps his art pure, the way it’s supposed to be.