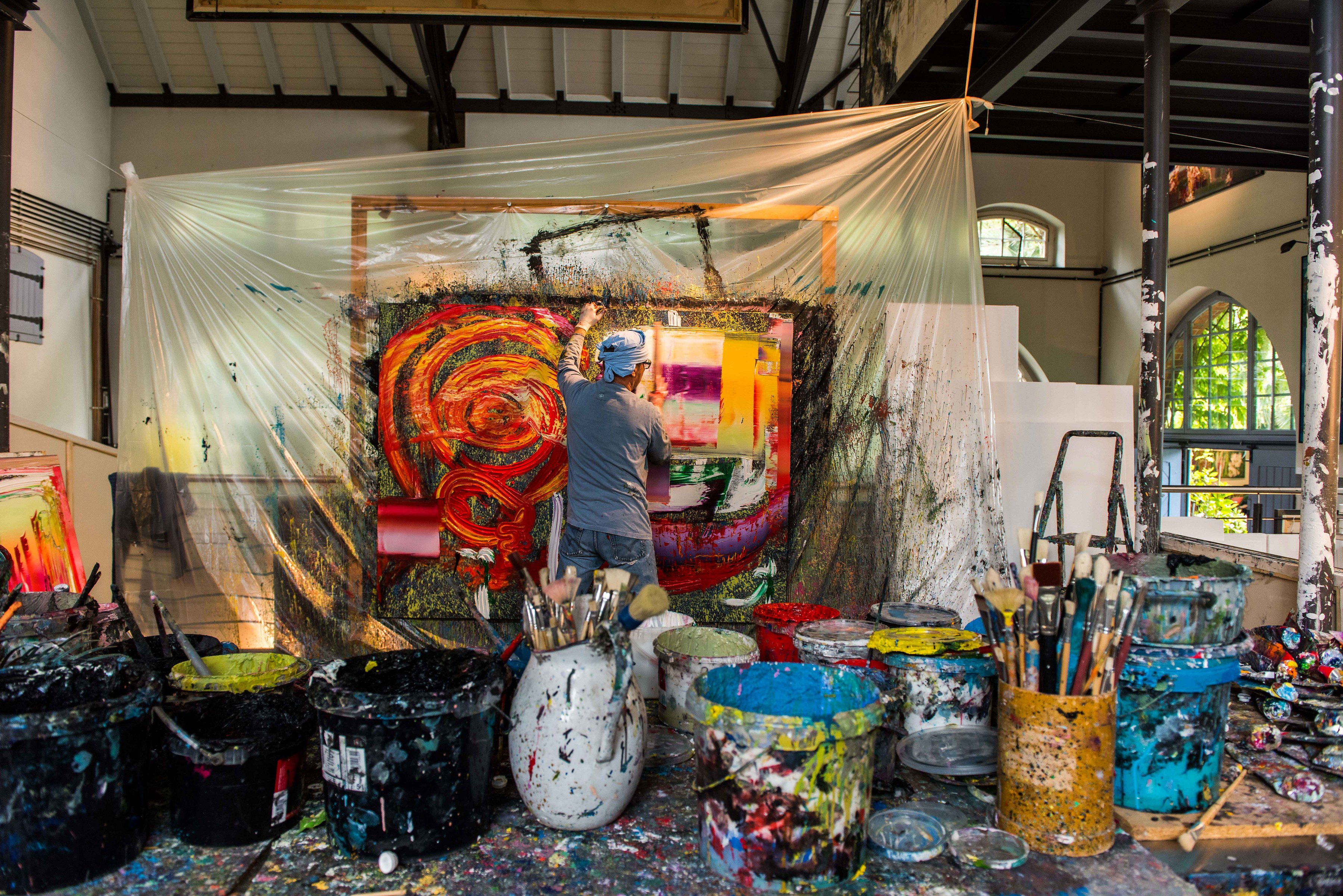 What made you decide to produce art or be an artist?

I have always been on a journey, even in my past. I come from a humble background, and there were seven of us – ﬁve children, mother and father – in a small ﬂat. The desire to be outside, surrounded by nature, to become one with it, must be familiar to everybody. For me it was an aura: lying in a ﬁeld, listening to the rustling of the forest, looking up at the sky. I have always known that I wanted to be an artist. I set out into the unknown. I hitchhiked. Allowed the unexpected to occur. I graduated from the National Academy of Art, Karlsruhe. Later, I went on study trips to places including the Seychelles and the Canary Islands, as well as Bali, Malaysia and Mexico. I went diving, to the summits of mountains, to the jungle. That is the personal colorful world that has become part of me thanks to my voyages of discovery – in search of an artistic essence.

Have you always been an artist or have you worked in other fields?

I’ve always only been an artist.

Being honest, authentic, approachable. That is what I want in and through my art. I do not follow trends or hypes – and that is perhaps what the viewer of my art can sense and detect. I have developed my own “signature” as a painter. An expressive, very pastose style of painting in layers that is always in pursuit of nature, despite its optical abstraction. That has always been the case. And it will deﬁnitely always stay that way, even in the face of all of the possibilities of my artistic “Discovery”!

I can allow processes to occur, developments. My artistic requirements of myself are not ﬁxed, not limited by the compulsion to use particular forms, colors or subjects. This nurtures the love of experimentation. I want to allow myself to be surprised again and again; I want to abandon myself entirely to the magic of pictorial creation.

Who or what has influenced or inspired you most?

My mother had a green thumb, and I liked going into the forest to collect mushrooms and pick blackberries with my father. And I must have inherited my manual skills from my parents, too. My mother was a basket maker, and my father was a bricklayer. In my life and in my art, it is all about that which one creates with one’s hands. I am not a cerebral person. Keeping things, securing and constructing them. Placing plants into the soil, nurturing life. Creating a home, being homely. Viewed from the point of view of my artistic origins, I actually started with sculpture and drawing. This is a signiﬁcant reason why my painting has a large number of sculptural elements.

I had a childhood dream: a large double door that I could open in order to step into my own Garden of Eden. This dream has come true. Not least as a result of the fruits of my manual labor, if I may use that expression. Thanks to my painting. It was made possible by people’s enthusiasm for my art and their loyalty to me. Every day I can open the gates and enjoy my own natural landscape as an inspiration; I can take care of it and look after it. This ﬁlls me with satisfaction, humility, and deep gratitude. It is by no means a given for me, and I am aware of the fact that this gift – everything that I have here – is merely on loan. I am indescribably happy that it has worked. Every day.

It is a luxury to look out of the studio through generous windows to see nature, or simply to walk out into the garden in order to return indoors ﬁlled with inspiration. This interplay of inside and outside animates me,
supplies me with energy and strength, and is visibly present in my pictorial world: in the form of vistas, spatial zones, an in-front-of, and a behind. Come to think of it, there is also a relationship to my own art presentation here in the old pumping station of Neckerau. You see, since 2004 I have opened the gates to my artist’s house to a broad public, speciﬁcally once a year, for a one-month-long exhibition. About 3,500 visitors come on those occasions. But basically the doors are open to art enthusiasts and collectors several times throughout the course of the year. Allowing people “outside” to take part in my art world “in here” also animates me – until I close the gates again for a period of puriﬁcation and of focusing on that which is inside.

As a painter, I aim to develop, and am therefore on a constant search for new approaches to paint, its materiality, and the aesthetics of its effects. So it is true to say that I set out on a formal and technical research trip. What is exciting about it is that my pastose painting gestures, layered in a variety of colors set the stage for paint as an independent surface, which is awarded its own scope of action. Some of the zones of paint have a roughed-up, brushed appearance. Some rise in waves and others fall in creases. Some have rainbow-colored and feather-like structures. And others again are mysteriously diaphanous or thickly opaque, or disappear in the depths of the painting behind dripping areas.

I experiment with the ﬂow in order to create the areas of paint. It is all about the method of the exposure of paint, about going over it again, peeling it, leaving it where it is, adding to it. A “give and take” with the artistic means that are available to me: ﬁngers, hands, paintbrushes, palette knives, squeegees, and combs. “Give
and take” plays a signiﬁcant role in my everyday life. I attend to a social commitment. For me, it is almost an obligation that one should give back something of what one receives. I remember that well from my childhood. Being given a piece of cake from elsewhere. I have not forgotten that, and have nurtured it. 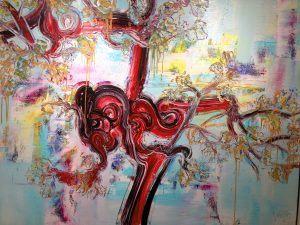 As a viewer, one can uncover exciting effects and a wide variety of interpretations. A jungle-like wilderness, tree-stump-like growths, elements reminiscent of bark and snakes. There are vistas of wide, rain-wet horizons and of the silent ﬂow of watercourses. One might sense the freshness of an early-morning atmosphere or humid, tropical midday heat. These are all individually viewed possibilities. Pictorial patterns are broken up here, patterns are dismantled. They are interspersed with glimmers of hope and subtle elements of light. It is the painterly attempt and the human desire to let that which has become rigid, fears, and limitations escape into the diffuse. To let oneself turn into the wide open, the free, and the open, into the air that we breathe. To transform the heaviness of life into the boundless, into the light.

I always focus on this: my pictorial world should remain open to the viewer in its readability.

Is your work found in any notable collections?

Solo Shows listed below in “Where has your work been shown?”

The pursuit of one’s passions, the realization of one’s dreams. If you want something, do it! With conviction. With courage, determination, and joy.

My most recent highlight is that I will be the first artist with a solo exhibition in the European Parliament, Brussels, in January 2017.

A short CV with a few more highlights:

1961 born in Mannheim, Germany 1985-1991 Studied at the National Academy of Fine Arts, Karlsruhe as a student of professors Wilhelm Loth, Michael Sandle, Harald Klingelhöller, Katharina Fritsch, Werner Pokorny and Elisabeth Wagner 1988 Annual exhibition of the Academy of Fine Arts, Karlsruhe, Germany (first prize) 1989 scholarship awarded by the city of Mannheim (sojourn in Krakow, Poland) 1998 Recipient of the Advancement Award of the Ludwig-Roos-Foundation 2001-2003 Restoration and conversion into a home and studio with an artfully designed garden landscape of the Neo-Gothic Altes Pumpwerk Neckarau pumping station (dewigned and erected in 1903 according to the plans of Mannheim’s director of town planning Richard Perrey) in accordance with monument preservation guidelines 2004 The artist was awarded the monument preservation prize of the Württemberg Hypo, the Schwäbischer Heimatbund, the Landesverein Badische Heimat, and the Denkmalstiftung Baden Württemberg for the work he commissioned as owner of the new “Altes Pumpwerk” (Old Pumping Station) Mannheim-Neckarau 2008 „WELDE Art Award“ (recipient of the audience ward) 2014 „WELDE Art Award“ (recipient of the audience ward) 2015 Mannheims Cityscape Award (monument preservation award). Since 2004 Annual exhibitions of new Brixy’s works have taken place at the Altes Pumpwerk (Old Pumping Station) Neckarau . They have developed from an insider’s tip into must-see events for art enthusiasts. Exhbitions include, 2004 „Wine Harvest“, 2005 „Roots“, 2006 „In the round“, 2007 „Grow“, 2008 „Beyond“, 2009 „Eden“, 2010 „Seven“, 2012 „Discover“, 2013 „Achtung Brixy“, 2014 „TEN – Ten years art in the Old Pumping Station“, 2015 “Surprise”.
Painting and study sojourns in other European countries (since 2003: regular trips to the Canary Island La Palma, where his works on paper, which are part of the “Eden” series, have been created and continued since 2009) and in Malaysia, Mexico and Bali, as well as on the Seychelles and in the United States, anong other places.

If you would like to check out our contemporary wall sculpture fine art pieces in Fort Lauderdale, click here.