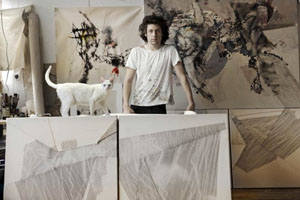 Myles Bennett is a Brooklyn-based artist working in painting, drawing, apparel, and sculpture. His focus on the personal scale of construction and materiality has evolved into an exploration of the intersection between gesture and the inherent properties of surface. Whether resulting in figuration or abstraction, the process reveals the sensual and spatial relationship between the material’s structure and the body itself. A graduate in architecture from the Rhode Island School of Design, he currently lives and works in the Bushwick loft he designed and built from a raw industrial space, and exhibits in galleries throughout the United States.

“In the summer of 2011, a friend introduced me to the work of Hanon. As I came to learn, Hanon was a 19th century composer. The constant throughout remains the raw canvas surface which guides and initiates each piece through its tactile and visual qualities. In the daily practice of becoming, I’m able to isolate moments of potential, develop them through repetition, and re-weave them into the larger scope of the project, exploring the surface with freedom of hand so the mind can wander to potential interpolations and future mutations.”