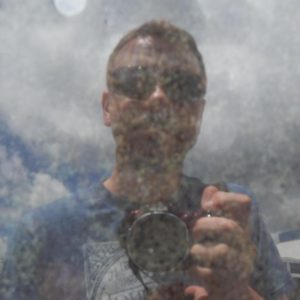 “I am interested in exploring the potential for a painting to create an immersive, dislocating experience.  My favorite moments with a painting are when I realize that I have slowed down, that I am blocking out the rest of the room, and that I am not just looking at the painting, but looking into it. This experience is not dissimilar to the way we interact with television screens or computer monitors…the physical reality of these screens seems to drop away as we become more focused on the image(s) they display, and we forget about them as objects and instead look at the content that seems to exist behind their screens. A painting is an object, just as a television is, but it is also, at the same time, something immaterial, an image, like a projection on a screen.  It is simultaneously real and false, present and absent.  This duality is something that I think links the seemingly anachronistic practice of making and looking at paintings to our screen-obsessed culture in a very direct way.  I try to emphasize elements of my paintings that I think make this sort of immersive experience more likely– vivid, glowing color, a sense of internal illumination, and complex layering of marks, patterns, and fragments of images that allude to space behind the surface of the paintings.”

Phillip Lynam was born in Indianapolis, Indiana in 1976. He received his BFA in painting from the Cleveland Institute of Art in 1999 and his MFA from the University of Maryland in 2001. After several years as an adjunct professor of art and design in the Washington, D.C. area, Phillip returned to Indianapolis in 2003 and began working at the Indianapolis Museum of Art, where he works as the chief designer. Phillip lives outside of Indianapolis with his wife, son, and daughter.