Pier was born in 1957 in the province of Udine (Italy).
Pier’s passion for art was obvious from a very early age, and his family quickly realised he had inherited his grandfather’s artistic talent. When he was 12, the gift from an aunt of two books on Michelangelo and Cézanne stimulated him to try and copy the illustrations. Instead of buying the things that attracted other boys his own age, as soon as he had a little money, Pier headed for the general store in nearby Cividale to stock up on painting requisites. Even today, Pier can smell the spices and oils every time he remembers the shop.

When he finished middle school, Pier enrolled at the art college in Udine, where he began to study the classics and to recreate some of Michelangelo’s masterpieces in various techniques. Art college enabled Pier to discover another great passion, photography. At art college, he put together portfolios of rural subjects for fun. They were to become evidence of what the territory looked like before it was devastated and profoundly transfigured by the 1976 earthquake…

1976 was also the year Pier graduated in applied art, graphic art for advertising, and photography. While he was a student, Pier was attracted to eastern philosophies, in particular yoga, a discipline that would absorb him for seven years as a teacher of Hatha Yoga. In this period, Pier went twice to France, where he was initiated into the first stages of the elevation of the spirit.
In 1978, he opened a graphic design and advertising film production studio. Painting was relegated to his spare time while he concentrated on directing music videos, television commercials, documentaries and cartoons. He set up a radio department at the studio, and in a few years owned two radio stations. In parallel with his work, he pursued hobbies such as scuba diving, caving and trekking. He led survival courses and for ten years was a member of the speleological section of the regional Alpine rescue group.
His bond with nature became steadily stronger.
Pier’s years of caving gave him an intimate relationship with the rock to which he often moulded his body and his face. He learned to become familiar with rock, and submit to it in order to find a way through deep fissures. It was in the womb of Mother Earth that he lived his most profound experiences, ranging from moments of peace and harmony to the panic and shock of the tragic accidents he witnessed.

Pier’s voice still trembles with emotion when he talks about them.
From 1992 to 1994, he took part in a number of thrilling expeditions to places of incredible natural beauty in Central and South America: the experience changed his life. He realised he had become too wrapped up in his work. He had too many commitments, and too many worries. He decided to sell his radio stations and take a year off.
1994 was the year of the great change. In Nicaragua, Pier met a Friulian lecturer from the Academy of Fine Art in Venice who had settled long before at Managua, where he executed gigantic, stunningly beautiful murals.
Pier sensed that the moment had come to devote himself entirely to painting. 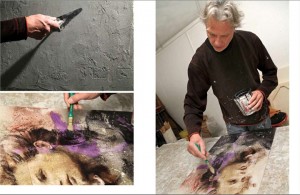 It was not an easy choice. Sleepless nights and suffering accompanied his artistic explorations.
Once again, the spark – the key – to everything lies in nature. Pier felt a strong, irresistible need to recreate natural surfaces that would resemble the slabs of scarred and graffitied rough stone that made such an impression on him during his caving days.
It is difficult to merge classical figures with rough surfaces, yet both are part of Pier’s story. Stubbornly, he worked on painting after painting, only to end up destroying or erasing it. Again, Pier showed himself to be a man who makes difficult but exciting decisions in his constant search for adventure, both at work and in life. Results were not slow in coming.
Through the intimate relationship that bonds man to rock, we understand why it is that we are sometimes confronted with works that look as if they were carved in stone. Even the materials that Pier uses for the surfaces of his paintings, such as powdered marble dust, clay or sand, rise to the surface from the depths of his explorations.

He obliged himself to find a chemical-free amalgam. Pier is man addressing the natural world with the gentle, careful spirit of someone who respects and loves nature, takes possession of it and is able to discover its limits.

Art gives Pier the opportunity to bring out what his years of experience have left inside him. This means that Pier now naturally combines his physical, but above all interior, explorations of the depths with a search for new painting surfaces.

Painted figures, most of them female, become an integral part of the background with just a few strokes of the brush. In an interview for the November 2004 issue of the Japanese art magazine Art Pictorial, Pier revealed that the subject – woman – is a pretext for a representation of the natural essence that lies deep in all of us. It is nature stripped of all prejudice or disguise.

In Pier’s art, marks and graffiti have become a mysterious language. Recently, Pier has said that “the media bombard us with images and words. Text after text now just bounces off me because I have a simple mind and I cannot take too many inputs. So I look at the texts, I strip them of their meaning and find them interesting as texture, as images. I recycle them in my paintings, turning them into an art form”. This reflects the particular moment the artist is going through. A change is under way. Pier feels the need to explore new artistic worlds, worlds that he already knows technically, like photography, film, animation or sculpture. He wants to probe current events more deeply, or revisit the Renaissance in an even more modern key. He is pushing even further beyond the “evocation of the present” that is the subject of the first part of this book.
This continuous evolution means that Pier conserves the enthusiasm and desire to express himself that have underpinned his entire artistic exploration.

Pier is a free spirit.