What made you decide to produce art or become an artist?

I come from a very large family, where love for art and science has always been very present. My paternal grandfather was Mayor of the city of Jaén (Spain) where I was born. He was also a pharmacist, historian and philosopher. His great cultural concerns led him to participate in numerous cultural projects, besides being the promoter of the Archaeological Museum of Jaén. He stood out as a great art collector, so art was always present in my family. In fact, some of my uncles are artists and architects.

From an early age I became interested in painting, so I enrolled in drawing classes. My teacher would take me to visit the historical centers of some Andalusian cities, such as Granada, Jaen and Seville, He always said: “draw things that catch your attention.” I was always interested in the architecture around me. I was impressed by all the pictorial details of the Renaissance and Mozarabic architecture of those beautiful churches. And it was there where I discovered my passion for architecture, for the volumes, the forms, the geometry and the shadows. From that moment, I knew that art was going to be part of my life. Throughout my career, I have always been studying various artistic expressions, from painting and photography, to pottery and porcelain. 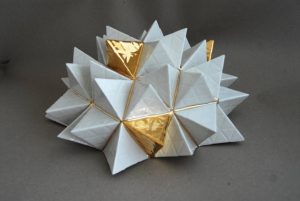 Have you always been an artist, or have you worked in other fields?

I studied architecture at the Polytechnic University of Madrid and later in London. My conception of architecture has always been more artistic and oriented more towards the design of interior spaces, furniture and objects. After my return to Madrid I received an offer to work in Mexico. During my time in that beautiful country I discovered the importance of the use of color, which I then applied to my work.

Back in Madrid, I wanted to explore new artistic expressions, so I enrolled in the School of Ceramics in Madrid, where I spent 6 years… I just loved those years. I was always learning new things about the glazes, and the cooking of the clay and porcelain. As it was expected, my work had an architectural influence. My first works were highlighted in numerous national and international competitions. Thanks to them, I began to exhibit my artwork in galleries and museums.

My creative processes arises from my own curiosity. I am curious to know about things, to know about their development, to know about what lies behind them. My creative processes are not so much a product of an inspiration, but rather, of a work based on a previous study of a particular subject. For example, my collection Divina Proportione, started from a curiosity for the evolution of polyhedra throughout history. I conducted an investigation that led me to focus on the study of polyhedra made by Leonardo Da Vinci, which ended up being the inspiration for the development of my project. This could justify why all my collections are very different from each other in terms of the use of materials, the format itself, or even the meaning they entail. Although they all share the same geometric, architectural and plastic sense.

What has influenced or inspired you most?

Throughout my life I have felt a deep admiration for the work of several artists, but what really inspires me are the events that happen within my own environment, events that affect me and that make me reflect. For example, when the terrorist attack of 11S happened in New York, I was in the city of Miami. Through the television I saw one of the great symbols of modern architecture, the Twin Towers, disappear in a matter of seconds. That led me to want to pay a tribute to them: I wanted to plastically capture the void that the disappearance of these towers left in New York City. Since that terrible day, I worked on my project First Apple.

First Apple is the title under which I expressed my particular view of the origin of the world. To achieve this, I used the technique of pointillism, reinterpreted and applied within the volumetric representation of the island of Manhattan, considered by many the center of the modern world.

Georges Seurat, creator of Pointillism, sought to reconcile the rigid principles of drawing with the optical principles that inspired the great colourists. Based on this idea, and wanting to reflect our digital age, I replaced the concept with points per pixels, thus creating a pixelated world.

Manhattan is also known as the Big Apple, fruit of discord associated with the creation of mankind through Adam and Eve. A vigorous, dynamic, powerful, changing and chaotic city, with great symbols such as the missing Twin Towers, a symbol of a society and a cuture. Hence, the size of First Apple has the same proportion of the twin towers, in order to give more emphasis to the concept of “origin of the world.”

The pixel canvas of the different volumes that make the city, resemble the windows of skyscrapers. The background of this pixel canvas generates different volumes, which create great contrasts of light. On this blank canvas, used as a grid sheet, I painted different motifs and symbols of the city, which are applied only to the top of the volumetric pixels.

The project was first made of clay in order to make silicone moulds, which were then used to make the resin and polyester reproductions.

I do not have an specific material or format with which I feel identified. On the contrary, I like diversity and this has made me explore the plastic goodness of many materials (clay, porcelain, bronze), as well as techniques (painting, photography, sculpture).

In my work, the sculptural, geometric and architectural character always stands out. Still, as an artist I do not like to impose the meaning of my work on anyone. On the contrary, I enjoy the variety of readings that your work can generate in the general public. We are people with intellect and emotions, our own experience or mood makes us react in one way or another to an artistic manifestation. I know my inspiration, the creative process and the result of my work, but I like every person to be faithful to their own thoughts and feelings, without being influenced by personal meaning of my work. 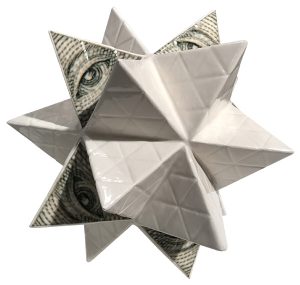 I have had different exhibitions at Madrid, Belgium, New York City and Miami but I had a great solo show with my Project FIRST APPLE at WHITEBOX Gallery, New York Nov 2011, and at Frost Art Museum, FIU Miami during Artbasel 2016

I have had two great awards in Spain: First prize of Award “Contemporary Crafts” Community of Madrid for the conceptualization and design of its products, the use of innovative materials and visual communication of his artwork, and Finalist in Product Award and Innova Arts&Crafts National Award FUNDESARTE 2013

Click here for more artwork and information about Ramon Espantaleon. >>