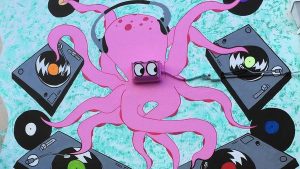 This Saturday, Eli Goldshtein wants to rally excitement for the MASS District art walk in Fort Lauderdale the best way he can: by unleashing his horde of 10-foot-tall LED robots.

Covered head to toe in 3,000 blinking LED lights and balanced on wooden stilts, a robot-costumed crew will dance through a warehouse district just west of the old Searstown plaza. An electronica band composed of more LED robots will play saxophone and djembe and spin records in the parking lot of a squat, triangular brown building on Flagler Drive, home to Goldshtein’s company Light Up the Night, which makes lighting and pyrotechnic effects for nightclubs. The dance party, also staged here in June, resembles something inspired by electro-pop outfit Daft Punk and characters from Disney’s “Tron.”

“We’re going to send our robots down [Northeast] Fourth Avenue so all the other vendors can feel the excitement of the MASS District,” says Goldshtein, 31, of Fort Lauderdale, who is adding a dozen food trucks and live murals to the LED bash. “We’re really starting to make the party pop off.”

Goldshtein is a member of the MASS District, an eclectic enclave of 15 art galleries and music venues, also known as Music and Arts South of Sunrise. He describes it as “run by artists who really have a say about what happens to the neighborhood. MASS District really has no border, and it can keep blowing up and blowing up.”

The district is a jumble of mural-covered warehouses in the shadow of downtown, all bound between Federal Highway and the FEC railroad tracks and between Northeast Eighth and Ninth streets. (There are a few outlying MASSers, such as Shade Post gallery near Broward Boulevard.) 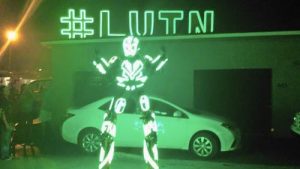 One example of the giant LED robots that will appear Saturday, July 25, at the MASS District art walk in Fort Lauderdale. (Light Up the Night/Courtesy)

Over the past few months, free trolleys offered by Flagler Village Civic Association have begun scooping up art crawlers in nearby FAT Village and plopping them in the MASS District. Parking is free and ample: A shopping-mall-size lot sits just west of Federal Highway. A window-tinting business and a car mechanic share the block with upstarts such as Dekkagon, a 2,000-square-foot art gallery operated by Joshua Tiktin.

“Once FAT Village maxed out to capacity, and became very expensive, artists needed to go someplace else. This was the next anchor hub that was close by,” says Tiktin, whose gallery rents wall space, studios, jewelry cabinets, clothes racks for fashion apparel — anything, really — to 19 artists, who run these microboutiques out of the building.

Tiktin, 40, of Fort Lauderdale, opened here in February, after running his minigallery concept in Washington, D.C., and Wynwood. He calls Dekkagon a “co-op” and his gallery tenants “artrepreneurs,” who help promote and sell art for one another via social media and walk-in visitors. On Saturday, the gallery will offer DekkaJam, a festival with five bands provided by performance troupe Conundrum Stages and food trucks.

On the wall outside Dekkagon is one of many murals that are transforming MASS from nondescript warehouses into colorful nooks. It’s Tiktin’s “DJ 10TIKLZ: The Dekkapuss,” a giant pink octopus whose tentacles grip records and switch turntable knobs.

The MASS art walk will, of course, fall on the same night as its FAT Village neighbor, to share foot traffic. July’s theme is #Muralize, an effort to turn MASS into a blank canvas for muralists. The district keeps a curated list of new murals at Muralize.MassDistrict.co.

“The owners are opening up their minds to the momentum this grassroots, artist-run district has gained, so they’re letting up put murals on their businesses,” says Ed Burnette, the MASS District’s executive director, who also operates nearby framing shop Art Attack. “In a year or two, the whole district will be covered in murals.” 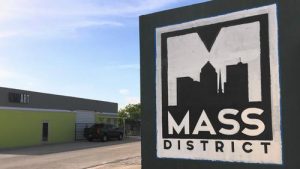 More traditional forms of art hang in Mary Ann Cohen’s gallery, MAC Fine Art, a lime-green warehouse not far from where Light Up the Night will set loose their LED robots. The group exhibit “Dali and Me” displays more than 30 Salvador Dali paintings next to interpretations from local artists. When Cohen brought her gallery to Flagler Village two years ago, the district lacked a name. The growth of MASS has been “organic,” she says.

“FAT Village came first, and now MASS developed so artists could create a unique identity,” Cohen says. “This is our moment.”

The MASS District Art Walk will run 6 p.m.-midnight Saturday, July 25, between Federal Highway and the FEC railroad tracks and between Northeast Eighth and Ninth streets. Admission is free. Call 954-866-3890 or go to MassDistrict.co